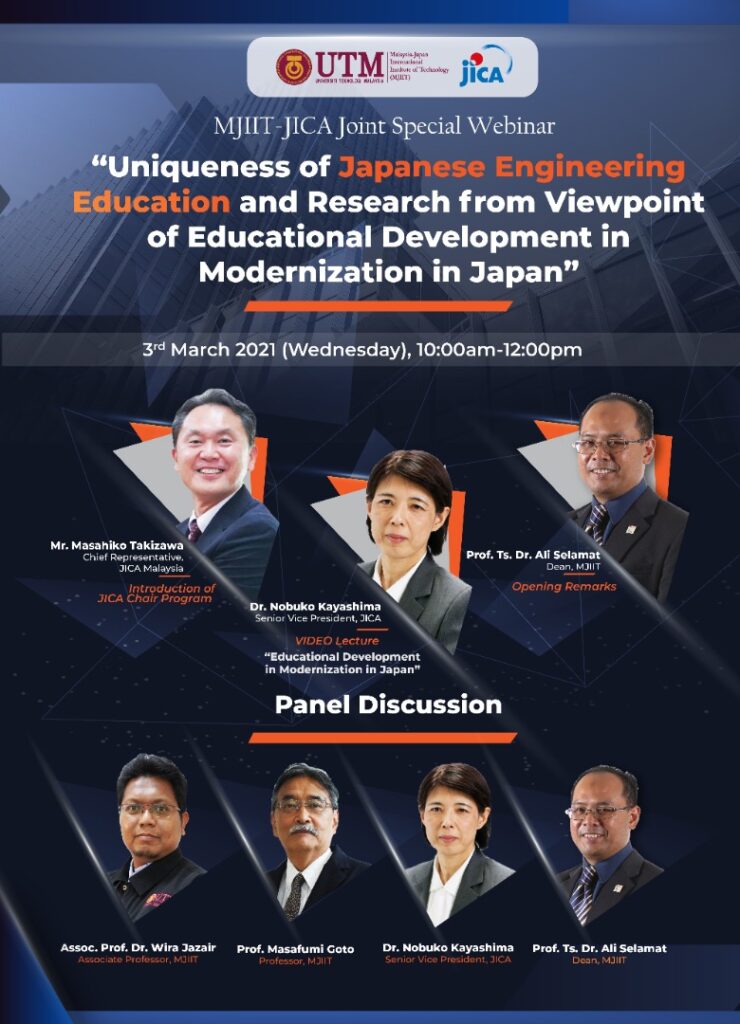 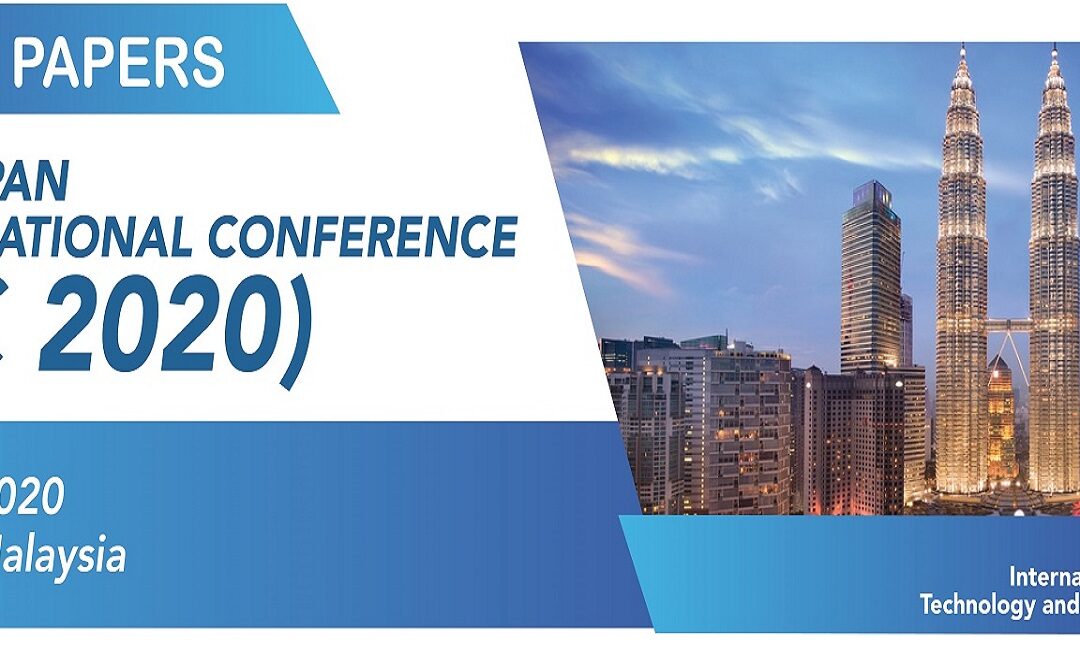 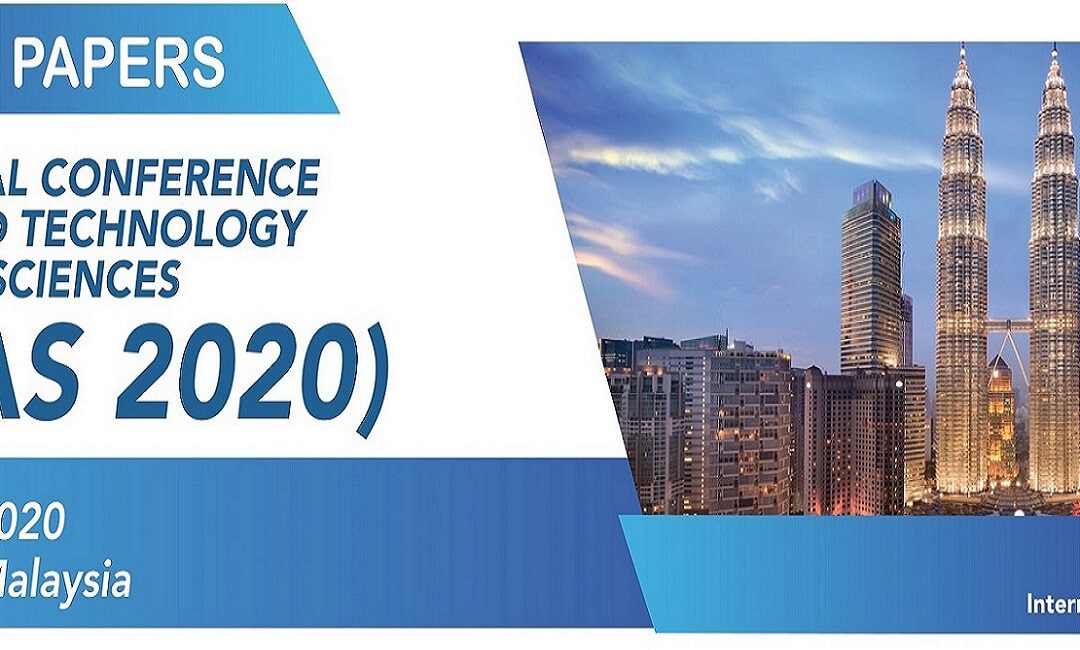 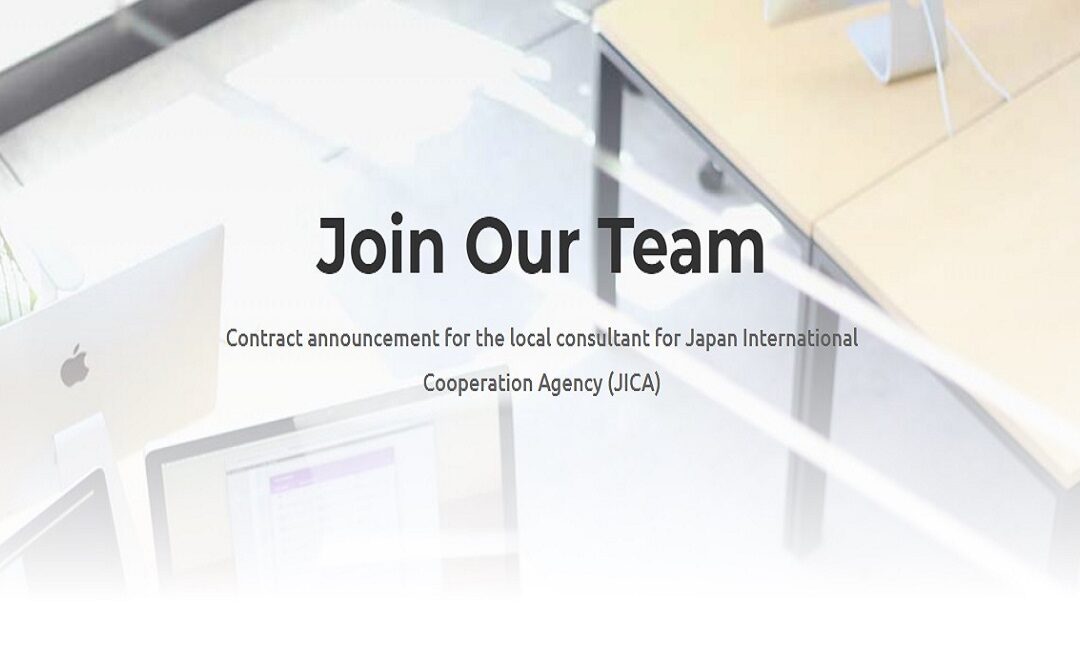 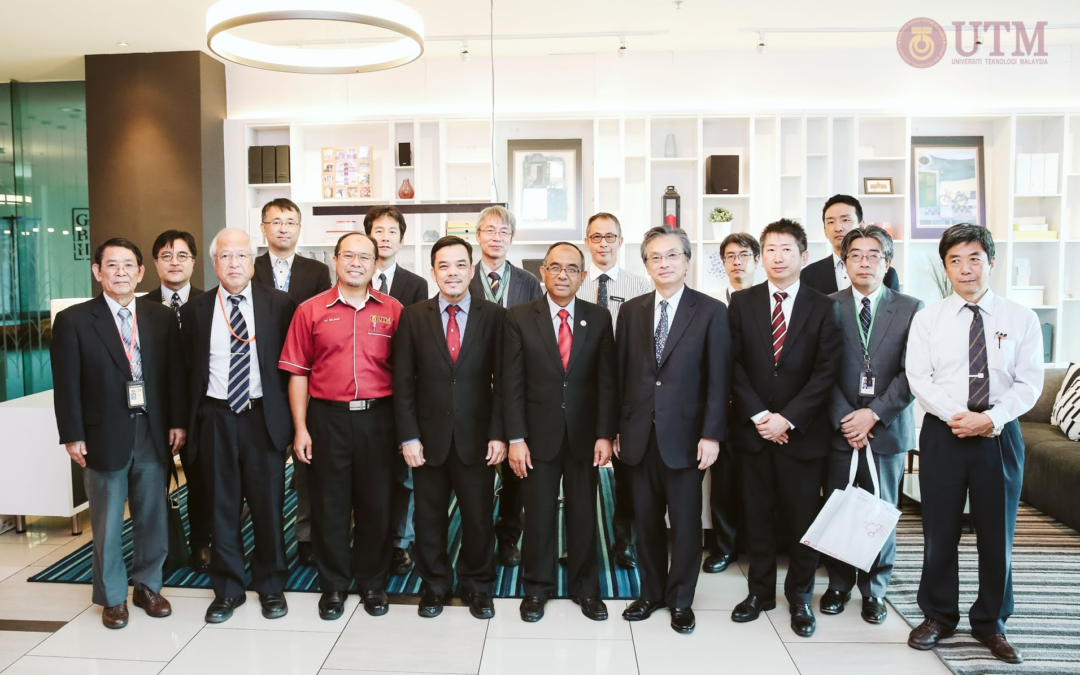 KUALA LUMPUR, 3 December 2019 – Malaysia-Japan International Institute of Technology (MJIIT) was honoured to graciously receive His Excellency Hiroshi Oka, the Ambassador of Japan to Malaysia for his inaugural visit to MJIIT. Accompanying H.E Oka were Minister Kaname Araki, The Japanese Minister to Malaysia and Mr. Sentaro Ishikawa, First Secretary to Ambassador were also present.

MJIIT Dean, Prof. Dr. Ali Selamat led the delegation with briefings on the the track records of MJIIT and how MJIIT intends to move forward in the next 5 years. H.E Oka congratulated MJIIT and noted that MJIIT has been a benchmark for other higher education institutions offering Japanese-based engineering programs outside Japan, and being an “excellent example to the world”.

MJIIT, established in 2010 as a Government-to-Government Initiative under the Look East Policy, manifests a unique education project between Malaysia and Japan. Japan has formed a consortium of 29 universities under the Japanese Universities Consortium (JUC) and has dispatched Japanese lecturers and professors to MJIIT providing support for the Japanese-oriented engineering programs for Malaysians. The commitment of both countries is strengthened by sending exchange students and staffs to Japan, setting up training programs in selected Japanese companies and partnering with Japanese universities through various academic and industry collaborations.

One of the main aim of the establishment of MJIIT is to provide cost efficient Japanese-style engineering and technology education to Malaysians and to other ASEAN nations. Young Malaysians need to only spend RM40,000 for a 4-year undergraduate Japanese-style engineering program in MJIIT Kuala Lumpur compared to an average of RM300,000 to RM500,000 for similar programs in Japan. This figure has yet to include the high living costs as well as other tuition requirements in Japan. Understanding the critical importance of this 2 nations project and how it contributes to the newly launched Wawasan Kemakmuran Bersama 2030 (WKB 2030), MJIIT provides special access and opportunity to students from the B40 bracket to join its undergraduate programs. 70% of the current student enrolment for their undergraduate engineering programs come from this income bracket.

With this cost efficient model in Malaysia, it is projected that graduates are capable to be employed by Japanese multinationals in Japan or in prominent Japanese companies neighbouring Malaysia. As of today, there are 1,400 Japanese companies operating in Malaysia, with about 700 in the manufacturing sector, 40% focusing on electrical and electronics. The rest are in the upcoming service sectors. Approximately 600 companies are registered with the Japanese Chamber of Trade and Industry Malaysia (JACTIM). MJIIT is working closely with around 45 of these multinationals to assist in producing the right human capital fit for these multinationals. As the aim of the LEP is to expose and groom young Malaysians in a Japanese work setting, and transfer of these knowledge and experiences back to our local companies, government institutions, and to the communities, MJIIT UTM plays a major role in producing highly capable graduates to be accepted by Japanese companies worldwide.

It is worth noting that in only a few years of establishment, MJIIT has supplied close to 200 graduate human capital to world renowned Japanese companies. To illustrate, 23 graduates of the 2018 batch alone are now attached to a number of Japanese companies in Japan, i.e. NSK, Nitto-Denko, Sumitomo Electronics, Kumonosu, Meiden-sha, UACJ, Daido-Metal, Kitz, Asahi-Yukizai, Railway Research, Hirakaya-Hyutech, SMK, Eagle Insutry and Shinei. 52 students from the same batch are attached to Japanese companies in Malaysia, 67 are attached to various MNCs around the country, 38 with the public sectors and 25 of the same batch are continuing their studies at a postgraduate level.

One of the factors making MJIIT graduates highly sought by Japanese MNCs is their ability to communicate in both verbal and written Japanese. Via its Japanese Language and Culture Centre (JLCC), MJIIT grooms students in Japanese language and culture, with emphasis on Japanese work values and verbal communication before exposing them to various mobility programs in Japan. One of the informal initiatives of JLCC is the Nihongo Café, where students can talk in person with Japanese guests in Japanese language.

Students are given the opportunity to apply their knowledge on 5S, Kaizen, Monozukiri, Senpai-Kohai, Ningen-Ryoku, Rinkoh sessions and others learnt from their lectures and lab exposures in MJIIT UTM in selected programs in Japan, before they graduate. These special programs encompass paid internships in Japan, research activities with Japanese universities, student exchange programs, joint-supervision with Japanese professors in Japan, double-degree programs, Jukebox programs and collaborative international i-kohza programs in Japan. The most popular initiative is the Sakura Exchange Program in Science, an opportunity for MJIIT students to be in Japan alongside selected Japanese university partners. Since the establishment of this unique program, hundreds of students have stayed with their Japanese counterparts in Japan for a minimum of 3 weeks to 6 months. It is hoped that they would transfer what they have learnt in Japan to their local friends and network.

H.E Hiroshi Oka’s inaugural visit to MJIIT marks the trust and strengthens the bilateral relationship of two nations, in building a better education for the world. 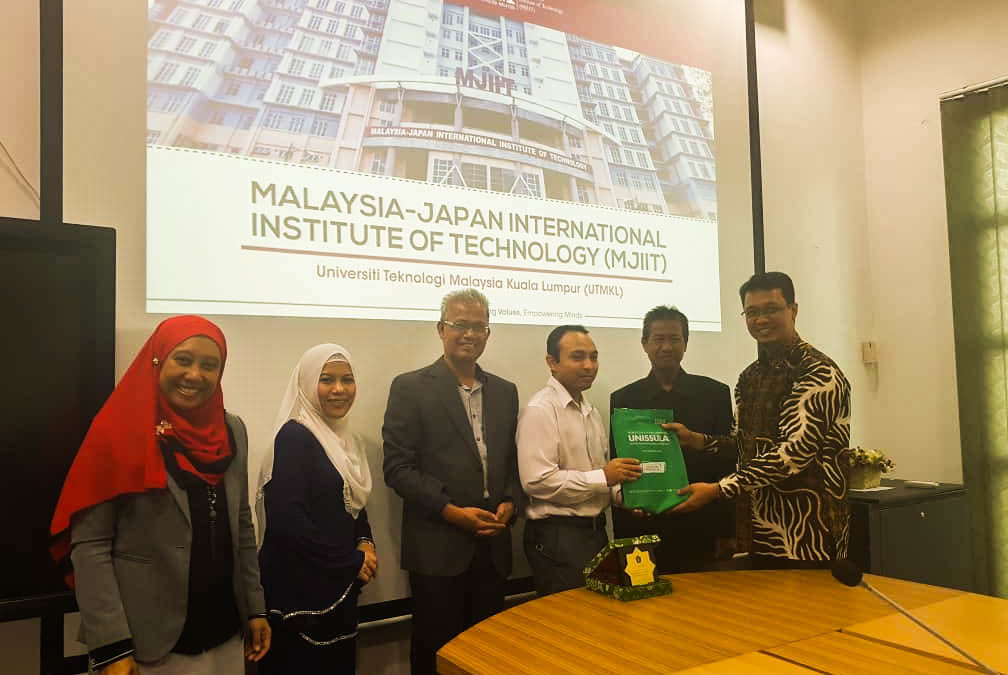 MJIIT Receives Visitors From All Around the Globe Almost Each Day!

6 November 2019, MJIIT UTM – The Management of Technology team of MJIIT UTM hosted the Dean of the Graduate School and his delegates from UNISSULA, Universitas Sultan Agung Semarang, Indonesia yesterday to initiate talks on collaborations in interdisciplinary programs and modules and more importantly to benchmark on MJIIT programs, especially the Master in Technology & Innovation Management degree.

The delegates were also brought to MJIIT UTM’s unique IP and Valuation Lab, a collaborative effort between MJIIT UTM and Yamaguchi University, Japan, and the one and only unique IP lab in Malaysia.